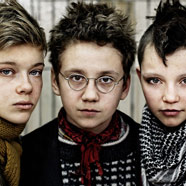 We are the Best!

Stockholm, the early 1980’s. Despite the constant declaration that punk is dead, 13-year-old music lovers Bobo and Klara refuse to pay attention and form a punk band while clinging on to the anarchist ideals that set them apart from the other girls at school. Based on a graphic novel by Coco Moodysson, the film captures an electric anarchist impulse and effortlessly highlights the indescribable sense of possibility that only music can offer. Featuring three electric performances from its young leads.