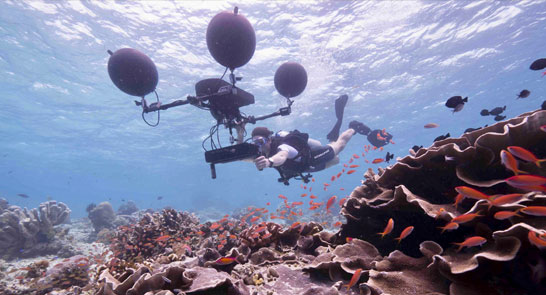 Have a drink and listen to some tales behind field research and expeditions.

Exeter Intrepid Explorer’s talks are in partnership with University of Exeter Global Systems Institute and are held on the last Thursday of each month. It’s free entry, and there’s no need to book tickets, just turn up.

Join us for an underwater acoustic adventure with Blue Planet II scientist Steve Simpson. A far cry from Jacques Cousteaus Silent World, in reality the ocean is a remarkably noisy place, with whales, dolphins, fish and invertebrates all producing sound to communicate. These sounds range from the haunting song of the humpback whale song to the explosive clicks of snapping shrimp, and are important for social interactions, courtship, predator avoidance and locating and selecting habitat, especially at night. But since the Industrial Revolution, we have been adding a whole raft of noises to the ocean, including shipping, motorboats, offshore construction, oil and gas prospecting and naval sonar.

In this talk Steve will explain how he has pioneered new ways of listening to the ocean and of interacting with fish (including underwater puppetry), to understand whole soundscapes and to unlock the language of fish. He will also discuss his engagement with key marine industries, aiming to reduce and manage human noise pollution in the quest for quieter seas. Steves research was featured in David Attenboroughs Great Barrier Reef series in 2015, and his work on underwater noise pollution recently screened in the final Episode of Blue Planet II last month.