Under 16s to be accompanied by an adult 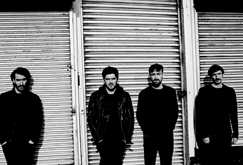 ‘ this is Twin Atlantic stepping up their intensity, their aggression and their commitment to achieving greatness on their terms they look destined to conquer everything they touch.’
KKKK KERRANG!

‘Turns out, when Twin Atlantic unleash untold savagery in the form of a pop song, theyre amazing.’
**** NME

‘theyve upped their game beyond measure. GLAs songs are snappy, its drums gigantic, its guitar riffs thrilling and McTrusty sings  with the conviction of a man reborn. Anthem piles upon anthem  and this is surely what Twin Atlantic were aspiring to all along.’
**** Q

Twin Atlantic have become the alternative rock band of the moment with the release of their Top 10, critically acclaimed new album GLA. Their performance on Later with Jools Holland and their triumphant UK tour has shown them to be one of the UKs best live acts around, so much so they have just announced another UK jaunt.

Hailing from Glasgow, Scotland, Twin Atlantic is composed of Sam McTrusty, Barry McKenna, Ross McNae and Craig Kneale. Having met in 2007 while attending Hutchinsons Grammer School, and Glasgow School of Art, the group built up a strong reputation both locally and nationally before recording their debut EP, A Guidance from Colour in 2008.

Late 2016 saw the band headsinto their highly anticipated album GLA. These songs, from riff, to lyric, to guitarist Barry McKennas searing lead lines  are possessed of powerful complexity and nuance. The perfect polished pop songs have been ditched, replaced by tracks that are just as compelling, but also possessing new depth and sophistication, while never shedding that primal Twin Atlantic kick. And they are personal and from-the-heart in a way the group have never before delivered.

GLA was written in Glasgow, and the band relocated to Topanga Canyon in Los Angeles to record the album, working with Jacknife Lee (US, Snow Patrol, Two Door Cinema Club) who had previously produced some tracks for previous Top 10 album Great Divide (2014).

Under his direction, they eschewed old school recording techniques, taping their parts separately. This change in their recording process marked the grander ambitions of the new songs, while their dream mixer Alan Moulder (best known for his unforgettable work with Arctic Monkeys, Foals, Foo Fighters and My Bloody Valentine) came aboard to give the album the essential finishing touch.