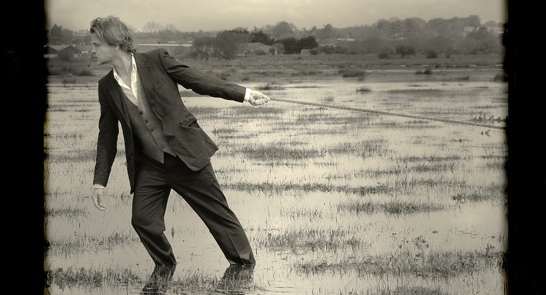 Tom McRae, long regarded as one of the UKs finest singer songwriters promotes the release of his sixth studio album, From The Lowlands, the second part of the critically acclaimed 2010 release, The Alphabet of Hurricanes.

From The Lowlands is a return to the stark production simplicity of his multi-award nominated debut album, released to critical success 13 years ago. Written following the suicide of a close friend, these songs deal with episodes of life at its harshest, as well as a longing for better times, both past and ahead.

Characteristically raw, powerful, and with a strong narrative theme, they demonstrate a confident songwriter growing in stature with every album. Always entertaining, with a self-deprecating sense of humour, Tom is adept at taking his audience on a journey, which promises to make these shows a lot more than a simple solo gig.

Tom’s fantastic live reputation is hard won and well- deserved, in the 13 years since the release of his Mercury and Brit nominated debut, he has toured regularly all over the world, garnering a fiercely loyal audience, especially in Europe and North America. Having moved from Suffolk, to London, to LA, then New York, and now living in the lowlands of Somerset, Tom’s song writing has remained similarly restless and searching.