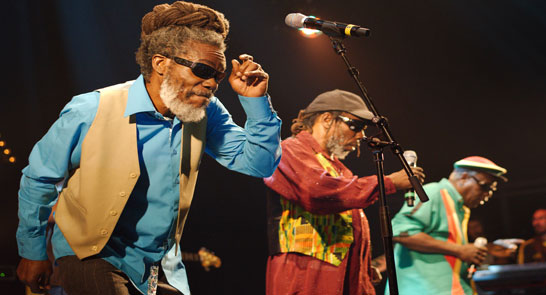 The Mighty Diamonds  Donald Tabby Shaw, Fitzroy Bunny Simpson and Lloyd  Judge Ferguson – formed in 1969 in the Trenchtown area of Kingston, Jamaica. They are the most consistent and long-running vocal trio in Jamaican musical history and for the past 41 years have been entertaining and educating the world with their sweet harmonies and conscious lyrics.

Formed in 1969, their smooth harmonies and choreographed stage show were inspired by Motown vocal groups of the 1960s. Their mid-1970s work with producer Joseph Hoo Kim gave them their real breakthrough: Virgin Records signed them and the group’s debut album, Right Time, was released in 1976. The album was an international success. The group’s Deeper Roots, released in 1979, was their next big album success, again released by Virgin, on its Front Line label.

In the early 1980s they recorded with producer Gussie Clarke, and dubplates of these sessions became popular on sound systems in Jamaica, New York, and London; particularly “Pass the Kouchie”, which became an international hit twice, when first released and again when it was covered by Musical Youth with altered lyric to remove the drug references, and released as “Pass the Dutchie”.

The group continued to release albums regularly, adapting successfully to the prevailing digital rhythms of the 1980s and beyond. Tabby, Bunny and Judge have produced over forty albums in their long career.