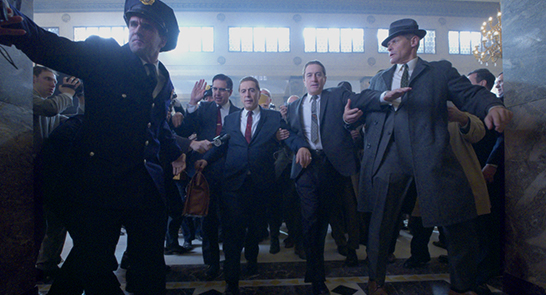 Please Note: The screening of Thu 12 Dec has unfortunately been cancelled due to a fault with the The Irishman screening file.

An epic masterpiece from Martin Scorsese about the mysterious disappearance of Teamsters union leader Jimmy Hoffa.

Robert De Niro plays Frank Sheehan, a WWII veteran who falls in with the Italian mob. Falling under the wing of Russell Bufalino (an excellent Joe Pesci), he rises through the ranks, eventually becoming friends with the hugely influential Hoffa (Al Pacino). And yet, when Hoffa ends up in debt to the mob, the friendship must be put aside.

With a superb cast, including Anna Paquin, Ray Romano, Harvey Keitel and Stephen Graham, this is a spectacular trip through decades of modern American history through the story of an infamous crime.