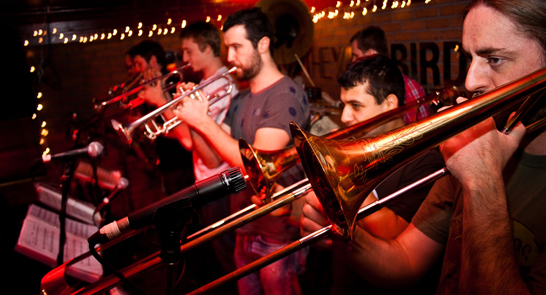 Plus support from Mutant Vinyl

East Londons Hackney Colliery Band continue to reinvent the brass band sound for the 21st century with their new LP Sharpener. A tour de force of trumpets, trombones, saxes, sousaphone, marching percussion and electronics, the band are as inspired by contemporary rock and electronica as they are New Orleans marching bands and the traditional British brass bands to which their name pays homage.

Formed in 2008 out of a desire to play music that appealed to the feet as much as to the ears, the band has rapidly gained an army of loyal supporters, including radio support from Lauren Laverne, Gilles Peterson, Craig Charles, Huey Morgan, Jamie Cullum, Rob Da Bank and John Kennedy. Since the release of their eponymous debut in 2011, the 9-piece have blown their way into the public consciousness with their energetic and passionate live shows, amassing fans worldwide and reinventing the brass band sound for the modern age.

New LP Sharpener shows the band on fine form and more confident than ever, with powerful new electronic elements and a dance floor sensibility adding to the jazz, rock and soul for which they are known. Building on the strength of their critically-acclaimed original writing, Sharpener has a powerful set of originals at its core, alongside a trio of leftfield covers in the shape of Nirvanas Heart-Shaped Box, Kwabs Wrong or Right and Three Trapped Tigers Cramm. Its a record that resounds with humour, charm and the hum of the glorious variety of musical genres that emanate from their hometown.

Alongside their critically-acclaimed releases, Hackney Colliery Band have really stormed the live circuit, selling out two-night runs at Wiltons Music Hall and the Jazz Café in London, playing main stages of festivals including Field Day, Love Supreme, Wilderness, Cheltenham Jazz Festival and many more, and even performing a 45-minute set in the Olympic stadium as part of the Closing Ceremony of the London 2012 Olympics. On the international circuit theyve performed in clubs and festivals from Sziget in Hungary to G! Festival in the Faroe Islands, and in countries including Slovenia, Montenegro, Italy, Kosovo, France, Austria, Holland, Germany and Ireland.

But the band are never content to rest on their laurels or to keep things simple, and are keen collaborators. Over the years theyve run a series of experimental music nights at Ronnie Scotts, a weekly new material night in venues across London, and worked with collaborators including Amy Winehouse, Fyfe Dangerfield, Eliza Doolittle, Jamie Cullum, Andreya Triana, Williams Fairey Band, Rhodes and DJ Yoda. More leftfield collaborations have even included working with a sausage maker on the Hackney Colliery Banger and with legendary London brewery Trumans on their own hugely popular ale Bold as Brass!

They have performed live sessions on Radio 2 and Jazz FM and their performances have been featured on BBC Two (The Culture Show), Sky Arts (Brass Band Wonderland) and live at the BRIT, Mercury and MOBO awards.

With Sharpener their most exciting work to date, a tour taking in more venues than ever before and a collaborative EP out in the autumn, this looks set to be a huge year for Hackney Colliery Band.

‘Reinventing the brass-band format for the 21st century
THE TIMES

‘This is the most enjoyable, fun music that I know of’
THE OBSERVER