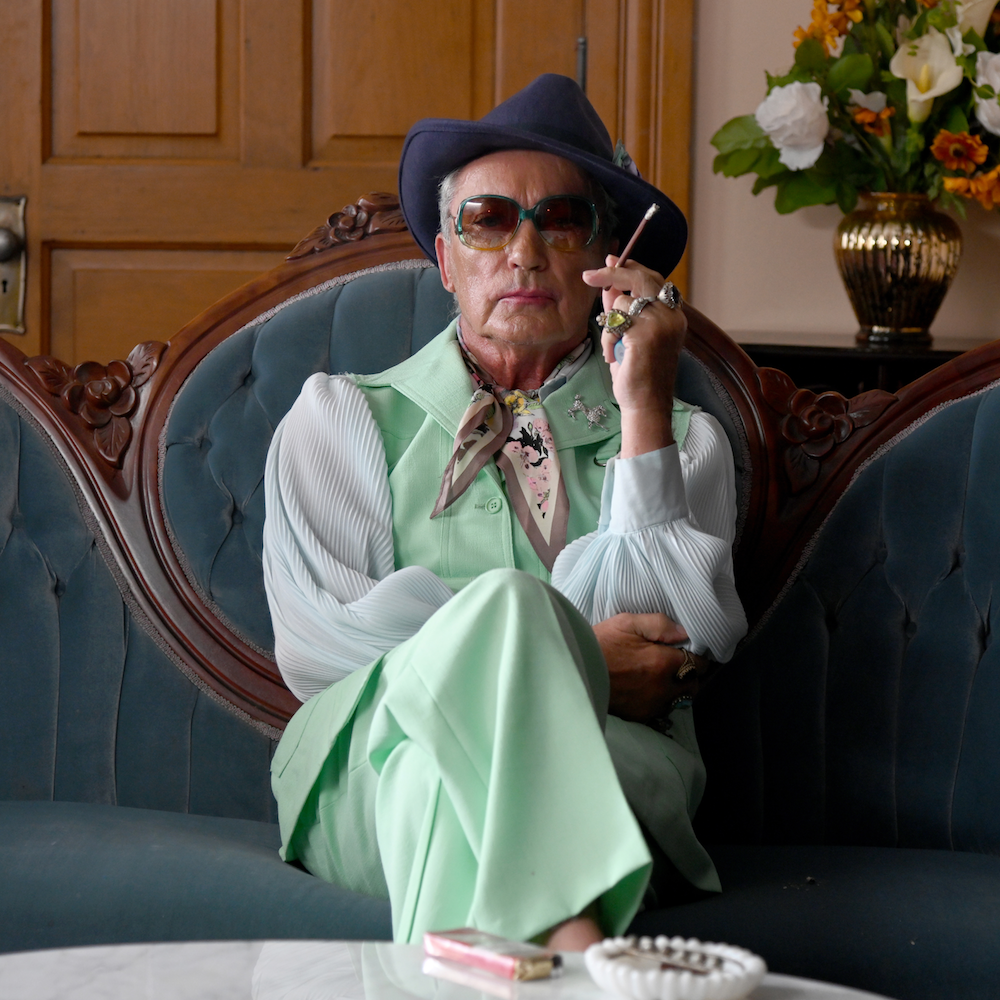 In Swan Song retired hair stylist Pat Pitsenbarger (Udo Kier) escapes his nursing home to embark upon an odyssey across his small town to style the hair of his dead ‘frenemy’ for her funeral, confronting the ghosts of the past and rediscovering his sparkle along the way.

Swan Song is a colourful, compassionate and comical journey about rediscovering oneself, and the bittersweet motivation for still looking gorgeous even at death.

Back in 1984, I walked into my small-town gay bar for the first time — The Universal Fruit and Nut Company. There he was, glittering on the dancefloor. Wearing a teal feather boa, fedora and matching pantsuit, “Mister Pat” Pitsenbarger was busting old school moves straight out of Bob Fosse. I was seventeen, and Pat was a revelation.

Years later, when I set out to write my autobiographical EDGE OF SEVENTEEN, I immediately thought of Mister Pat. I went back home to hunt him down, only to discover Pat had just suffered an aneurism and was temporarily unable to speak. But his lover David told me stories about how Pat was once the most fabulous hairdresser in Sandusky, Ohio, about his legendary drag performances and about how he used to shop at Kroger’s dressed as Carol Burnett – in 1967! This was a man who always had the courage to be himself, long before that was safe.

The truth is, Mister Pat inspired me to write EDGE OF SEVENTEEN. I wrote a significant “Pat” character as my protagonist’s mentor, but midway through the shoot, the part got cut. I always knew my muse would return someday in my writing, and when he finally did many years later, I looked for Pat again only to learn he just passed away. Sadly, Pat’s legendary hand-beaded rhinestone gowns are all lost to time. Only a shoebox remains – filled with some tarnished jewellery and a half-smoked pack of Mores.

SWAN SONG is a love letter to the rapidly disappearing “gay culture” of America. As it has become more acceptable to be queer, what used to be a thriving community is rapidly melting back into society. Thanks to assimilation and technology, small-town gay bars like The Universal Fruit and Nut Company are becoming extinct. SWAN SONG is dedicated to all the forgotten flaming florists and hairdressers who built the gay community and blazed the trail for the rights many of us cling to today. But, above all, for me this film is about learning that it’s never too late to live again. – Todd Stephens

Start your day the Studio 74 way! Take advantage of our breakfast deal and enjoy a freshly prepared breakfast in our Café Bar before the screening on Tue 5 July.