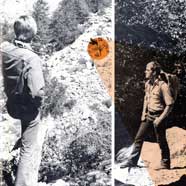 The ties that bind me to my brothers are not wrapped around my wrists, but rather are fastened to my heart.

In this new work, Paige explores the concept of fraternal relationships and resuscitated texts, incorporating a short daily performance, video and installation. The title derives from an anonymous quote, commonly used as a motto by American college fraternity houses.

The work investigates possibilities that arise through the repeated re-articulation of a short section of script, appropriated from the opening (non-explicit) scene from a 1987 American adult movie. Through this re-iterative process and by re-contextualising the purpose, place and form of the original, Paige aims to unpick the way that masculine identity managed and translated. He looks at how this becomes a motif or modus operandi in fraternal dealings, continuing an ongoing exploration of the intersections between biography and late twentieth century popular culture.

Paige has worked with a network of collaborators to stage, perform, film and respond in print to the work, bringing together the artwork’s multiple layers. Through a process of repetition and evolution, a piece of twenty five year old, illicit cultural artefact on the brink of historical and cultural obsolescence is reinterpreted and re-presented in the context of contemporary art.

Performances will take place at 4pm each day in the gallery.

Simultaneously with this exhibition, Paige presents his small installation, Cubby Hole (2011) in Gallery333 (located facing the rear entrance to the building) that uncovers the forgotten mementos of adolescence.

The exhibition has been supported by the University of Exeter