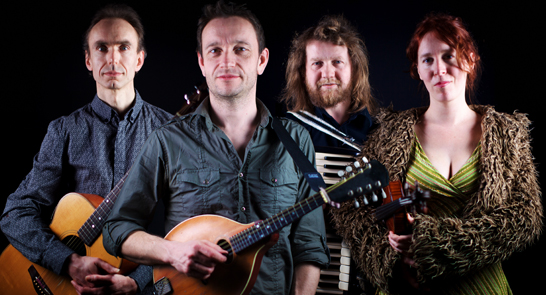 Spiro are something of a slippery beast when it comes to being contained by mere words. Guitarist Jon Hunt has a go.

We’ve got as much to do with minimalist classical and dance music as we have with folk. Even though we use folk tunes, they’re raw materials that the rest of the sound is built around.

One thing is certain  Spiro are their own people, commendably operating in their own sphere and at their own pace. This contemporary acoustic ensemble first came together through Bristol’s folk sessions scene in 1993, trading under the name of The Famous Five.
All four members, all four instruments, pull in the same direction, creating music that’s intricate yet so full of momentum. These are hurrying, scurrying soundscapes that sweep majestically with cinematic presence, echoing  at various points  the work of Steve Reich, Michael Nyman and the Penguin Café Orchestra. But, kindred spirits aside, this is the music of Spiro  undeniably English, undeniably theirs. Despite a slew of work for theatre, film and television, Spiro remain something of an enigma, a well-kept secret that’s only now starting to spread.

An engaging, experimental acoustic band from Bristol who defy categorization Spiro are that rarity: true English originals. ?????
THE GUARDIAN