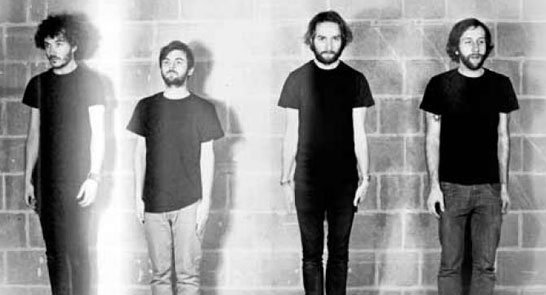 Since escaping the confines of a small seaside town and burrowing themselves into the UKS DIY scene, Spectres have swelled into an uncompromising beast. Formed in a cultural vacuum where the audience craved white reggae over white noise, the band were and always will be on the outside looking in. Instead of letting this bother them and altering their style to become accepted, the four piece applied a single minded approach to making music: if they hate it, play it harder, louder and harsher.

Harnessing the negative reactions from baffled crowds, and finding influences in the more depraved bowels of guitar music as well as harsh electronic experimentalism, the band have managed to crossover into territories where noise music is usually never mentioned.

In the two years between releasing their game changing Hunger EP and debut
album Dying they were selected by Too Pure to release a 7 for their Singles Club series, self released a now long sold out 10 and pummeled their way around the UK supporting the likes of Factory Floor, Lorelle Meets The Obsolete and Bo Ningen, earning a reputation of sucking the audience in and spitting them back out, showered in cathartic noise. Album of the Week in NME Magazine, features on Radio 1 as well as unanimous praise in all of the UKs printed press have all added to this triumphant gatecrashing…a couple of years ago this could not have been predicted, but Spectres have become impossible to ignore.

Despite their uncompromising attitude Spectres are not nihilistic  they channel their negative energy positively into an all-encompassing DIY ethic. Through their own Howling Owl label they publish zines, promote gigs and club nights and release amazing records for the likes of Oliver Wilde, The Naturals and Giant Swan. In 2014, feeling the need to maintain their own identity, they made the decision to leave Howling Owl and signed to Sonic Cathedral to release their debut album Dying in February of this year. The critical acclaim for the record has been staggering- unexpected for such an abrasive, act yet totally justified.

The rest of 2015 will see them tour Greece and France in the Spring, Portugal in the Summer before heading out to Europe again in September for Incubate Festival amongst others. They also have several new releases up their sleeves, as well as the usual relentless output of zines, artwork and videos.

An exercise in noise and melody that will leave you feeling dazed and abused
8.5/10, ALBUM OF THE WEEK, LINE OF BEST FIT

Plus support from Stella Martyr

Stella Martyr are an indie collective originally hailing from Birmingham, The Black Country, Manchester, Scunthorpe and Stoke. This gig sees them launch their first EP, a veritable treat of guitar lead, electronic pop.

‘…an Alice in Wonderland-like curiosity, worth further investigation and so different from the usual indie landfill clogging up our lives  and all the better for that. Keep eyes wide and hearts open.’
HUGH OLGIVIE, MUSIC MUSO