Shorts #4: Gay As In Hysterically Funny 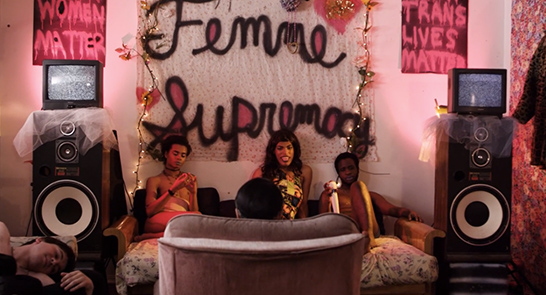 Shorts #4: Gay As In Hysterically Funny

All films in this short film screening will have captioned subtitles. Both the screening introduction and post screening panel discussion will be interpreted into British Sign Language.

Shorts #4: Gay as in Hysterically Funny

What does it mean to make fun of yourself and your community as an LGBTQ+ person? This programme examines queerness and onscreen comedy, including short films by Raymond Yeung, Jordan Firstman, and Alli Logout, and episodes from Ingrid Jungermanns classic webseries, F to 7th. Featuring self-loathing and loathable gay men, butch lesbians in denial, and queer femmes in their own carefree universe.

Followed by a panel discussion on queer comedy, on and off the screen, featuring comedian Rosie Jones and more guests.

Presented in partnership with Queer Film Network tour as part of the BFI Comedy Genius season, and in collaboration with Exeter Pride.

A fun and astute look at the self-imposed prejudices of a gay Chinese-British man. Anglophile Monty is looking for his perfect man, but only white British men need apply. That is until the attractive Jai Ming moves in next door and the two men seem to connect. Can Monty overcome his prejudices? Writer-director Raymond Yeungs debut short is a light-hearted comedy of manners.

An internally homophobic gay struggles to find herself in a world where sexuality and gender have left her old-fashioned lesbianism behind. In Tweener, Ingrid tries to deny her butchness when barred from a lesbian bachelorette party, whilst cheering on her softball team, the Wet Lips, alongside her misogynistic dyke friend.

On Josh and Greg’s first date, they quickly realize that the generational divide between them is the least of their worries. The infuriatingly mixed messages from a cute but potentially sociopathic millennial force an older man to choose between hopping into bed with him and bailing, in this darkly comical satire on entitled twenty-somethings.

Geeky and sensible Ingrid meets a woman online, who invites herself over for a hot night of passion, but what happens when both of them want to be the man?

Rosie Jones is a comedian and actress with a penchant for being mischievous. Her cerebral palsy doesn’t slow her down in the slightest. She has written for The Last Leg, 8 Out of 10 Cats, Harry Hill’s Alien Fun Capsule and Would I Lie To You?.

Tom Mayhew is a stand-up comedian and writer who was nominated for the Leicester Mercury Comedian of the Year in 2017, and reached the BBC New Comedy Award Semi-Finals in 2018. He has written for Newsjack, and has been heard on BBC Radio 4 Extra and BBC Radio 1.

Emily Souter Johnson currently touring her theatre show, Polyester, were she transports audiences back to the Georgian house in the centre of Dublin where she spent a happy childhood. Her theatrical work is comedy-led, honest and moving. In the past she has compered the iShorts Funny Women series.

Their goals are to share their collective knowledge and encourage one another through peer support to develop and nurture queer film in the UK and Ireland. Working together to create a vibrant and inclusive network, they hold bi-annual meetings for members to develop opportunities for collaboration. To find new content, build and promote programs to go on tour as well as access funding and develop helpful resources to share on our website.

Presented in partnership with Queer Film Network tour as part of the BFI Comedy Genius season and Exeter Pride.

BFI Comedy genius is a nationwide season supported by funds from the National Lottery, led by Film Hub Midlands on behalf of the BFI UK Film Audience Network