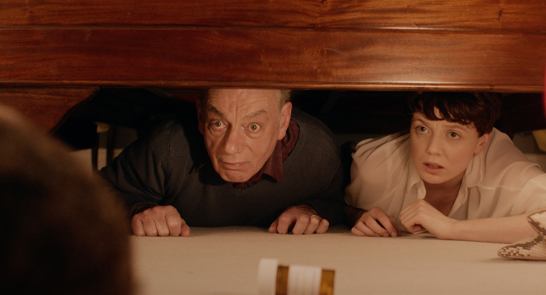 Presenting a range of the best short films from across Europe, exploring the highs and lows of growing old and marriage. We meet Pauline, who has a paranormal presence living in her oven and enter The Alan Dimension in order to foresee the fate of mankind, and breakfast. Glen Milners Sheffield Doc Fest selected film Elders, introduces us to Karim and Kartari Chad, the longest married couple in the world.

Fernando and Perfecta have been married for 50 years. One day, Perfecta finds out that Fernando is the one who is responsible for her cats disappearance and takes revenge during their anniversary dinner.

After leaving India for the industrial north of England in the 1960’s, Karim and Kartari Chand never imagined they would end up being married longer than any other couple in the world.

Mamie lives in Gaspésie in a house that faces away from the sea. When the old woman receives an expropriation notice, her cloistered world crumbles. Her granddaughter witnesses this uprooting and starts to question the lack of real ties between them.

A pious Doctor is forced to deal with a family matter whilst hiding under the bed of a stranger.

Meet Pauline Poulter. Strange marks appear on her arms, every time she cooks. Roasts dont come out right, and she keeps finding bloody handprints on her sideboard. There can be only one explanation: Pauline has got a ghost in her oven.

Dickie has run out of toothpaste, but Dot used to do the toiletries shopping.