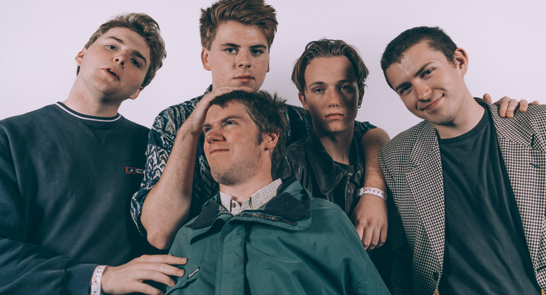 Whenever any kind of ‘progress’ is made in our society, it is naturally met with a reactionary group (most likely dominated by the older generation) who will fight to keep things unchanged, comfortable, safe.

Then there is Shame, five 19 year olds who have such a scent of the old-school, the original and the raw, regardless of how prescribed it may seem, that it’s invigorating. The excitement and the energy of the band lies in the collective, the reactionary force that will get the kids out from behind their screens and behind the band.

Recent history will show that the band are most certainly succeeding. Their reputation as one of the best new live bands in London is already cemented following tours with The Garden and Fat White Family and shows with The Fall, King Gizzard and more, as well as upcoming shows at Pitchfork Paris, Eurosonic and a support slot with Slaves, all despite not even having released so much as a single.

The Lick/ Gold Hole is their much anticipated official debut, a clattering one-two knockout of a double A-Side bursting at the seams with punk energy, but with the patter of the Streets, the spittle of Mark E. Smith, and the underground sprit of Eddy Current Suppression Ring, bristling with the frenzy, rage and exasperation of their youth.

‘Frothing energy and unrestrained charisma’
THE LINE OF BEST FIT

‘A filthy mess of The Doors, Sleaford Mods and The Pixies’
THE GUARDIAN