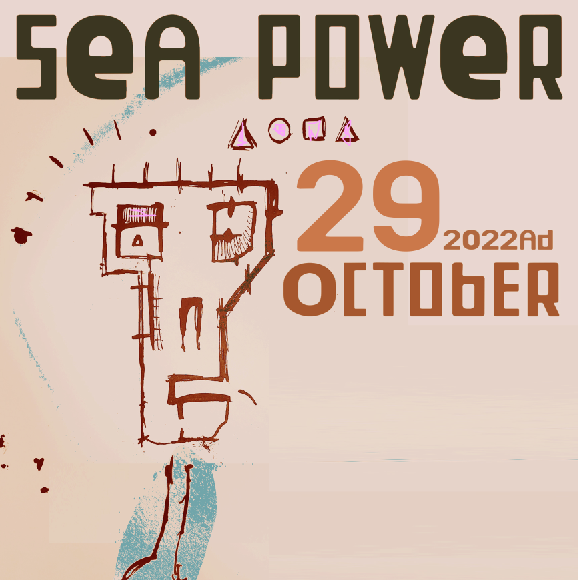 SP are based in Brighton; the band members live in Sussex, Kendal and on the Isle Of Skye.

Sea Power’s music has won them some remarkable admirers – Lou Reed, David Bowie and London’s National Maritime Museum. Indeed, the BSP fanbase now includes Doctor Who, Harry Potter and Sherlock Holmes. Peter Capaldi is a confirmed BSP fan. “A band of stark originality,” he wrote in his foreword for the reissue of the band’s 2003 debut album, The Decline Of British Sea Power. “BSP’s songs bring you the bite of the wind, the fury of the sea, and music that is simply exhilarating.” Daniel Radcliffe has talked in detail about his plan to get a BSP tattoo (featuring the 2002 T-shirt slogan Bravery Already Exists). Benedict Cumberbatch is also an admirer of the band.

Sea Power have played atop the Great Wall Of China, at the CERN atom-research labs and beside the diplodocus skeleton at London’s Natural History Museum. They’ve played at London’s Czech Embassy and beneath the big astronomical dish at Jodrell Bank. They’ve played on ships at sea, deep inside Cornish slate mines and at the Chelsea Flower Show. The intensity and invention of the band’s shows made them Time Out magazine’s Live Band Of The Year in 2004.

Twenty years on from their first concert Sea Power continue to make bold, galvanising, idiosyncratic marks on the world. Race horses and massive ocean-going yachts have been named after the band.  London’s National Maritime Museum recently opened a new £35m exhibition wing. Visitors are greeted by huge, sculpted quotations from Shakespeare and Coleridge – and a lyric from Sea Power.