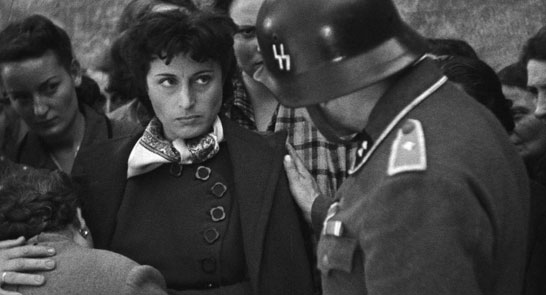 A special screening event celebrating Italian cultural heritage through one of the greatest films ever made, with an introduction from Danielle Hipkins (University of Exeter) and a post-screening Q&A with bestselling author Virginia Bailey.

A landmark of Italian neorealism, Rossellinis portrait of life under the Nazi Occupation remains remarkable for its sheer immediacy, tension and power. Made in extraordinarily straitened circumstances immediately after the liberation of Rome, the film follows engineer Giorgio (Marcello Pagliero) in his attempts to evade the Germans and the collaborating Italian authorities by seeking help from Pina (Anna Magnani), fiancée of a fellow member of the underground resistance, and Don Pietro (Aldo Fabrizi), the priest due to oversee her marriage.

The author of best-selling novel Early one morning (2015) joins us for a post-screening Q&A. Virginia cites the film Rome Open City as a huge inspiration for her novel, which is set in a 1940s occupied Rome.
Read Virginia Baileys article in The Guardian here >>

About The Italian Cultural Association

Italian Cultural Association Exeter aim to bring together different aspects of Italian cultural heritage, and to link people that share an interest in Italy with the local Italian community, through social events, film screenings and more.