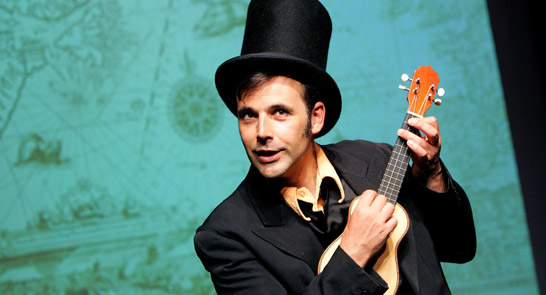 Rob describes the 150-year controversy in evolutionary theory and explores how the latest science demonstrates that DNA is not destiny. From a Devil’s Orchard made by lemon ants, to female buffalo voting which way to go, from Prince Kropotkin escaping a Tsarist dungeon to altruistic vampire bats and Richard Dawkins’ postman wrestling naked, Rob Newman argues that cooperation drives evolution more than competition.

‘I am completely in awe of Robert Newman. Of his talent, his passion, his intelligence, and the way he turns them to comedy with real firepower. If this world could be saved by a Superhero whose Superpower was Comedy, that hero would be Robert Newman.’
THE SCOTSMAN

‘He is the funniest comedian I have ever seenA passionate, chaotically brilliant comedian.’
THE SUNDAY TIMES

In the past 20 years Rob has performed five solo stand-up shows including From Caliban to The Taliban (500 years of Humanitarian Intervention) in (2003) and (2005) which was recorded and aired by More4 under the title A History of Oil. He has also written regularly for The Guardian and Vice magazine, and produced four novels, his most recent being The Trade Secret which is due to be released in April 2013, published by Cargo/Cargo Crate. His TV and radio credits include Robert Newmans History of Oil (More4), History of the World Backwards (BBC Four), Newman & Baddiel In Pieces (BBC Two) and The Mary Whitehouse Experience (BBC Two).