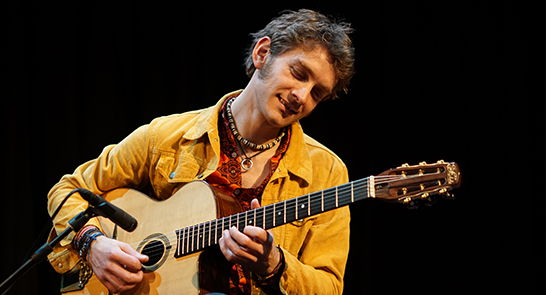 Remi Harris is an exciting guitarist from the UK who’s unique style draws inspiration from gypsy swing, jazz, blues, rock, electronic and world music. He has toured worldwide as well as performing at Buckingham Palace, Montreal Jazz Festival, BBC Proms at the Royal Albert Hall with Jamie Cullum, on BBC 4 Television and live on BBC Radio 2 and BBC Radio 3.??

In his live shows Remi plays an eclectic mix of original compositions, improvisations, jazz standards and new arrangements of music from Django Reinhardt, Jimi Hendrix, Wes Montgomery, Charlie Parker, Peter Green and many more. He plays a variety of acoustic and electric guitars and the shows are interspersed with his commentary about the history of the music and instruments hes playing.

Remi was named after the 2nd and 3rd notes of the major scale (Do “Re Mi” Fa So La Ti Do). He started playing guitar at the age of 7 and is primarily self taught learning from guitar magazines, videos and recordings. He was initially inspired by rock and blues guitarists of the 60s and 70s such as Jimi Hendrix, Jimmy Page and Peter Green. He played his first gig aged 11 and in his late teens he developed an interest in jazz music, in particular artists such as Django Reinhardt, Wes Montgomery and Stan Getz. Since then he has been growing a reputation for blending all of his influences into his own individual style of playing.