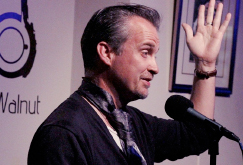 Kei Miller is a poet, novelist, essayist, short story writer, broadcaster and blogger. His many books include the novel Augustown (W&N, 2016) and poetry collection The Cartographer Tries to Map a Way to Zion (Carcanet, 2014) which won the Forward Prize (Best Poetry Collection of 2014). In 2010, the Institute of Jamaica awarded him the Silver Musgrave medal for his contributions to Literature. He has been an International Writing Fellow at the University of Iowa and a visiting writer at York University in Canada and at the Department of Library Services in the British Virgin Islands; he was also a Vera Rubin Fellow at Yaddo. He has a PhD in English Literature from the University of Glasgow and is currently a Professor of English and Creative Writing at Exeter University.

Harry Man was born in 1982. His first pamphlet, Lift won the Bridges of Struga Award in 2014, and his second pamphlet, a collaboration with the artist Sophie Gainsley, was shortlisted for the Ted Hughes Award in 2017. His poetry has been translated into Swedish, Chinese, German, Dutch and Slovak among other languages, and he was a 2016 Hawthornden Fellow. Last year Harry Man was a Clarissa Luard Wordsworth Trust Poet in Residence, as well as a TOAST Poet; he was also poet in residence at the StAnza Poetry Festival in Scotland. Together with his partner Jennifer Essex, Harry Man has written a new collaborative dance and poetry work for children called Space Rebel Princess which is currently touring to festivals throughout the UK and Europe.