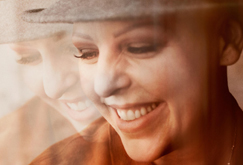 New Yorker Nell Bryden sets herself apart from her contemporaries with an impressive set of lungs and a catalogue of self-penned songs coloured with emotion.

In early 2016 Nell hosted her own 4-part BBC Radio 2 mini-series called Nells Angels, where she played the jazz artists that most influenced her as a singer, such as Sarah Vaughan, Ella Fitzgerald, Dinah Washington and Nina Simone.

The program inspired her to revisit the American songbook standards that she grew up singing, and shes put together a set list of her favourites.

As she heads back on the road, as well as acclaimed hits from Wayfarer and the rest of her back catalogue, shell debut the more soulful roots of her new record, due for release in September.

A woman who not only packs a vocal punch, but knows how to write a killer tune as well
CHRIS JONES, BBC