suggested £5 donation on the door 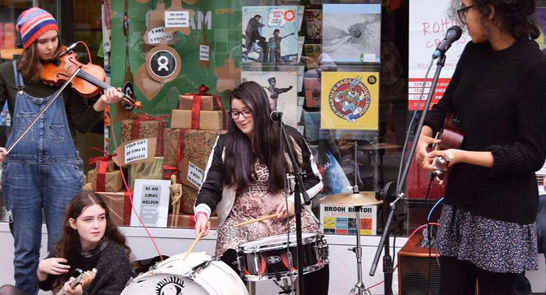 MIDI is a non-profit CIC which has been founded to support grassroots music. We would like to celebrate our 2nd birthday by inviting you to a showcase of talent from several of our projects. Metronomic Underground are an original indie rock band formed through Soundtribe’s workshops with homeschooled children. Samantics has been looping his ukelele and rapping at Amber Foundation’s supported living centre in Devon where residents recently recorded an original song that debuted at the Eden Project ‘Sleepout’. The Rushes are another great young band who performed at our 2nd Exeter Street Arts Festival and music from their debut EP will feature on the next Exeter Local Records music compilation. Songwriter Emily Howard also hosted a pitch and performed at ESAF17 and a track from her latest Random Fish label release will be on ELR volume 4.

MIDI is keen to collaborate with the wider musical community and support other community projects where we can. Find out more about us and fill in our musicians survey at www.musicindevon.org/survey