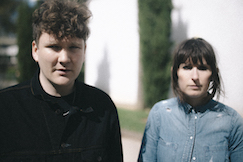 Matthew and Me have announced their return with the stunning new single Every Day in April.

The South Devon duo of Matthew Board and Lucy Fawcett have been making huge strides forward with their wonderfully atmospheric soundscapes and poignant song-writing, and this new single Every Day follows swiftly on from the bands acclaimed Startpoint EP, which surfaced late last year.

Built around soft synth lines, a delicately wistful vocal, and guitars lightly rushing in like brush strokes on canvas, Every Day carries the listener through a journey that feels both equally familiar and fresh and exciting.

Since their emergence Matthew and Me have quickly found themselves winning widespread support from the likes of BBC Radio 1 (Huw Stephens), BBC 6Music (Lauren Laverne, Chris Hawkins, Tom Robinson, Radcliffe and Maconie) and Radio X (John Kennedy), alongside performing at a series of major UK festivals that include Glastonbury, Field Day, Blissfields, and the Sea Change Festival in Totnes which they also helped to run and curate.

‘Their music is expansive and epic, considered and dynamic, which grows with wonderful organicity as it progresses’
THE 405