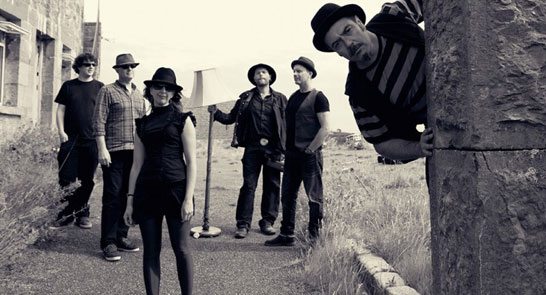 It was at Glastonbury in 2013 (notably the Avalon Stage), the release of their Happy Bus video, take-up from national radio from esteemed folk such as Mike Harding, and others. Matched with the unshakable dedication of their massive and loyal to the hilt, fan base  that Mad Dog Mcrea began to become more than just a very popular, West Country festival act;  whilst obviously killing it live  Mad Dog Mcrea, determined that their fans and media alike  should see them as serious and acclaimed recording artists too.

Mad Dogs new album ALMOST HOME, produced by Sean Lakeman, is an album fuelled with the all the essential Mad Dog energy and antics that the band have become known for  Dave Podmore writes engagingly about Mad Dog stuff  as one might expect, all night drives, police car chases  Folk musicians, in particular have been playing tribute to the heros of WW1 of late  MDM are no exception, offering up their bone chilling song  You Cant Find Me. The Sound written by Seth Lakeman includes beautiful guest vocals from Suzie Mac.

In constant demand and having played just about every festival and two-bit, jibe-arsed dive in Christendom, Mad Dog Mcrea are, in every sense of the word, a live, band  ALMOST HOME  encapsulates that  and so much more.

The famous purple happy bus is fired up and ready for action, and theres room for you  jump aboard!

‘This is rowdy, heartfelt, room shaking and spirit-stirring music that only the dead cant enjoy.’
ITDSTATE.COM