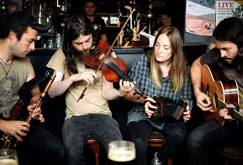 Cold Old Fire was recorded in August 2013, and although fundamentally an album of traditional Irish song, heavily influenced by Irish legends such as Frank Harte, Planxty and The Dubliners, subtle traces of the groups collective influences can be detected, from American old-timey music, ambient techno and psychedelic folk, to black metal, punk and rock n roll.

The band played a blinding set at last years Celtic Connections festival, where they were snapped up for both Cambridge Folk Festival and Sidmouth FolkWeek 2015. A live TV appearance on the Later With Jools Holland and a sold out UK followed.

In 2016 Lynched will continue to play some high profile dates in UK and Europe before heading into the studio to record the follow up to Cold Old Fire.

The most convincing band to come out of Ireland for years! ?????
THE GUARDIAN

Anarchic, yet connected, rootsy and gutsy I love their music, it is just so damn good!
MIKE HARDING

Cold Old Fire is a sure contender for any Irish album of the year lists.
SONGLINES