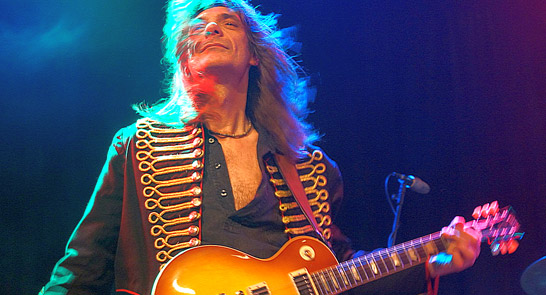 After picking up his brother’s guitar and writing his first song, he felt his future lay in Rock music, being influenced by some of the guitar greats – Jimi Hendrix, Rory Gallagher, Johnny Winter, Stevie Ray Vaughan and Gary Moore.

Very quickly, Larry found his own Blues/Rock style, and has been constantly refining it. He is a guitarist, singer, songwriter, with a love for his music which is simply infectious. With six critically-acclaimed albums under his belt he continues to surprise and amaze us audiences with his guitar virtuosity.

‘A big live draw for many years, Miller is now starting to write albums that bottle the white heat of his shows. With stinging riffs dropping like mortar fire, there’s a temptation to categorise Miller as a `guitar hero` but that’s a disservice to his excellent original writing and battle-scarred voice box. Business is good.’
CLASSIC ROCK MAGAZINE