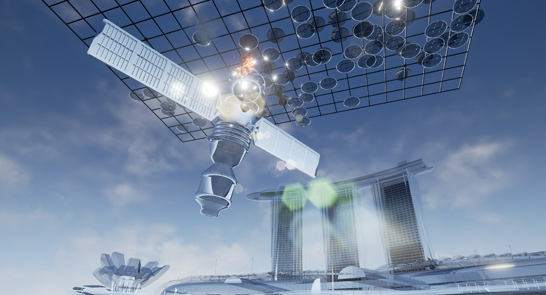 Jerwood / FVU Awards: ‘Neither One Thing Or Another’ and ‘Borrowed Time’

As part of Art Week Exeter, the Jerwood/FVU Awards will be screening four moving-image works by recipients of the Awards: two newly commissioned pieces by Patrick Hough and Lawrence Lek, and two works by the 2016 winners Karen Kramer and Alice May Williams. Taking place at Exeter Phoenix in Studio 74, the screening will be followed by a Q&A with featured artist Karen Kramer.

The Jerwood/FVU Awards are a major annual opportunity for moving-image artists in the first five years of their practice. The open application programme invites artists to make proposals for ambitious new works, two of which are selected each year, by a panel of experts. The artists have each received £20,000 to develop the works, with full production support from FVU. We will be screening works from the 2016 and 2017 award winners, with opportunity to ask previous award winner Karen Kramer about her experience.

And If In A Thousand Years by Patrick Hough

Deliberately buried, the film-set for Cecil B DeMilles The Ten Commandments was lost to the sands of time – under the dunes of the Southern California desert. In Patrick Houghs video, shot on location at the site, it is not just fake fragments of the past that are disinterred. What hovers over the place is a spirit of uncertainty; one that questions bedrock values like originality and authenticity and dusts them with other layers of meaning: the extraordinary ease of reproducibility, the spray-on glamour of cinematic semi-celebrity. This spirit of uncertainty is encapsulated by the figure of a sphinx – once part of the décor of the majestic film-set, now wandering in ghostly limbo; haunting the nearby town like a wildcat on the prowl. The sphinxs hybrid form and cryptic, enigmatic presence is also a symbol of a blurring between the material and the virtual.

As the geopolitical axis tilts further to the East, and as once-dominant economic/technological models are cast into doubt, Lek alights on a longstanding tension between the place of the human and the role of the machine, sharpened by contemporary hopes and anxieties around the rise of East Asia, and by speculations that new forms of artificial intelligence, already outperforming mere mortals in matters of automation and aggregation, will challenge us in more creative skills as well. In Leks video, one such AI awakens above Singapore on the eve of the city-states centennial celebrations in 2065. Mindful of the apparent relegation of AI to subservient roles in society, it determines that, from all the possible choices available to it, by far the best thing to be is to be an artist.

The Eye That Articulates Belongs on Land by Karen Kramer

Shot in Shiretoko National Park in the far north of Japan, and within watchful radius of the Fukushima Daiichi nuclear reactor, Karen Kramers The Eye That Articulates Belongs on Land offsets beguiling images of unspoilt nature with graphic visual evidence of the re-wilding of the landscape around the atomic plant since particular areas became off-limits to human access. Unseduced by romantic notions of wild nature as a wellspring of recovery or transformation, Kramers film is a reminder of how our perceptions of the natural environment are often deeply subjective, and prone to being clouded by myth, or partial knowledge.

Alice May Williams Dream City  More, Better, Sooner is a meditation on the changing face of Londons landmark Battersea Power Station  smokestack energy colossus of yesteryear now rapidly transforming into an upscale lifestyle playground of tomorrow. Combining archive footage of the building in its industrial heyday with computer-generated projections of the form it will soon inhabit (or what, if things had been different, it might otherwise have become), Williams film concentrates our attention just as firmly on the present moment  on the rumble of construction and the grumbles of disruption that currently characterise the site. This heightened focus on the here-and-now functions as the heartbeat of an extended monologue where, as if watched from an open window, a flotilla of images passes before our eyes, in allusive, associative procession. At times, within this gathering stream of words, Williams evokes the language of mindfulness, with its warnings of succumbing to memories of the past, and of the distractions of speculations about the future.

The Jerwood/FVU Awards are a collaboration between Jerwood Charitable Foundation and Film and Video Umbrella. FVU is supported by Arts Council England.