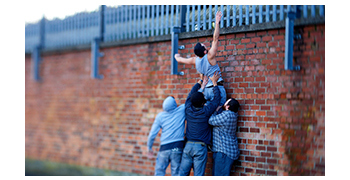 Showcasing the selected short films from this years Open Screening submissions.  Expect films from all across the globe, which will promise to inspire, challenge and above all entertain.

For some, life can be missing interaction. For others their sense of being is fueled by a series of tangled associations that result in nothing but further absence and isolation.

These films are motivated by characters that want to connect to someone, something, somehow.

The feelings and emotions experienced by two deaf people when they touch.

A duel in the woods, any given day.

What Do You See?

Handwritten by a care home patient, a poem was found by nurses shortly after her passing. Articulating the realities of growing old, What Do You See? expresses how she perceived her surroundings an in turn comments on how it looked at her.

Back To The Wall

Back to the Wall addresses the growing communication gap between different generations of people through sharing and exchanging ideas, skills and knowledge. Back to the Wall brings together men and boys, aged 7-80 years in a physical exploration of contentious, contested and divided urban environments using dance.

I’m In The Corner With The Bluebells

Half-siblings Julie and Ricardo meet as for the first time as adults and find an unwanted attraction.

In London, a young estate agent has to juggle making a crucial sale with looking after his ten-year-old son. Malcolm and Aron struggle to understand each other, while an urban fox follows them around one rainy night.