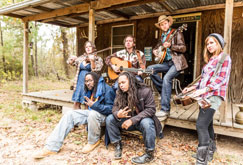 With their new and third studio album, Broken Hearts & Stolen Money  Gangstagrass can be found ripping up stages and blowing minds wherever they appear. The explosive live performance has garnered a buzz at SXSW, CMJ, and on tours across the USA. Now they are coming to Europe with emcees R-Son and Dolio!

There are a lot more people out there with Jay-Z and Johnny Cash on their ipod playlists than you think. says Rench, mastermind behind the genre breaking sensation Gangstagrass.

When FX Network came to Rench looking for the Gangstagrass sound for the theme song to their new series Justified, he had bluegrass players lay down an original track with rapper T.O.N.E-z, the result was Long Hard Times To Come, the song that opens every episode of the series, now in its fourth season.

The same live bluegrass band approach was used to make Lightning On The Strings, Thunder On The Mic, a full length album with T.O.N.E-z, the emcee featured in the Justified theme song. The second album Rappalachia, featured multiple rappers country singers laying the ground work for the 2014 release Broken Hearts & Stolen Money.

Having no desire to simply coast on the success of previous releases, Gangstagrass released its fifth official album American Music in April 2015. Featuring a collection of standout original cuts and traditional folk anthemswith a twist!American Music once again will find the artist breaking new ground, while also paying tribute to their cast of American songwriting heroes.

‘A mixture of bluegrass and hip-hop that might repel some purists on either side of the country-and- rap divide, but will knock the socks off just about everybody else.’
WALL STREET JOURNAL

‘Gangstagrass eclectic mix of low-down to down-low beats destroys other genres in their path.’
MAGNET MAGAZINE

‘A daring blend of innovative modern swagger and classic Americana cool which dares listeners not to come along for the ride.’
HEAR HEAR MUSIC