From The Jam With Bruce Foxton & Russell Hastings

All Ages | SORRY, SOLD OUT 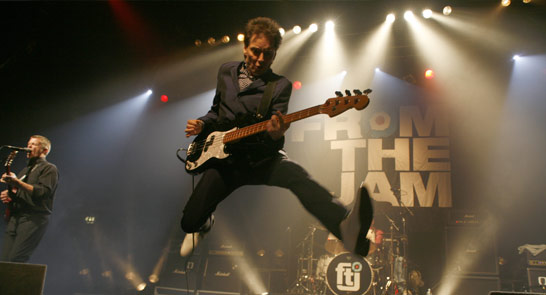 From The Jam With Bruce Foxton & Russell Hastings

From The Jam with Bruce Foxton & Russell Hastings

Support from The Real Me

Following multiple sell-out tours, From The Jam return in all their glory for ‘The Setting Sons Tour’, taking place at specially selected UK venues, including Exeter Phoenix.

Celebrating the 35th anniversary of the release of Setting Sons, The Jam’s fourth album, From The Jam will be performing this seminal release in its entirety.

Setting Sons is widely regarded as the band’s best album alongside All Mod Cons, and was declared by Record Mirror as “the last great album of the seventies”.

Featuring former The Jam bassist Bruce Foxton and legendary guitarist Russell Hastings, From The Jam will be playing tracks such as top 10 hit Eton Rifles and Little Boy Soldiers, as well Wasteland and the Foxton-written track Smithers-Jones, amongst many other much-loved classics.

Bruce Foxton has recently said, The whole idea of playing an album in full has really taken off for us and has brought back so many great memories – they were great times for the band then and I love the idea of bringing that excitement and thrill back onstage. We will also of course play the hits and more to make what I think will be a great night.

As has come to be expected, this show will sell out, so get your tickets now!

The Real Me are a three piece mod band from Devon.