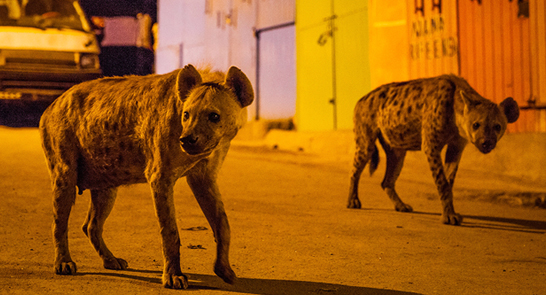 Cities are growing at a faster rate than any other habitat on Earth. They may seem an unlikely place for animals to thrive, but they can be a world of surprising opportunity. Leopards prowl the streets of Mumbai, langurs are revered as religious deities in Jodhpur, and locals live in harmony with wild hyenas in Harar. Many animals, however, struggle to cope in the urban jungle. As the architects of this environment, can humans choose to build cities that are homes for both them and wildlife? Fredi Devas, Producer of BBC Planet Earth II: Cities, takes us behind the scenes of this ground-breaking documentary series.

Fredi Devas is a wildlife filmmaker who cares deeply about the natural world and the challenges it faces. After completing a PhD on Chacma baboons in Namibia, Fredi did research on the bushmeat trade in Equatorial Guinea and then spent time living with the San bushmen in Southern Africa. Having worked on Meerkat Manor and Nick Bakers Weird Creatures, he joined the BBC to work on Frozen Planet and then Wild Arabia. Hes been lucky enough to film polar bears feasting on a whale carcass, camel racing with robotic jockeys, and be surrounded by nearly half a million King penguins. On Planet Earth II he decided to leave the wildernesses behind to produce and direct the Cities episode. Highlights included filming langurs and macaques in India, and hyenas roaming the streets in Ethiopia, where he was struck by the harmonious relationship between people and the potentially dangerous animals they shared their cities with.