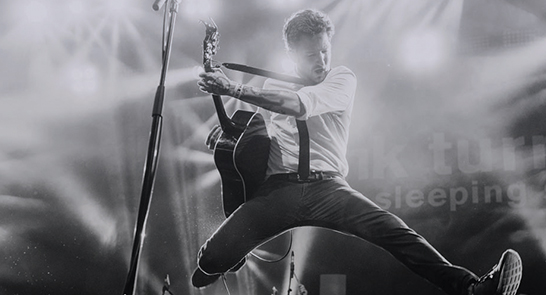 Support from Felix Hagan and The Family

Singer/songwriter Frank Turner has announced a mammoth UK tour in November with his band The Sleeping Souls. Frank released his sixth studio album Positive Songs For Negative People in August last year. debuting at #2 in the UK Albums Chart, the album features the tracks Get Better, Glorious You and Out of Breath.

He began his career as the vocalist of post-hardcore band Million Dead and it is over a decade now since Frank went solo following their demise. In that time, he has been on a constant upward curve with too many achievements to name but highlights must include headlining shows at Wembley Arena and the O2 and playing at the Olympics Opening Ceremony. He writes songs that inspire the crowd to reflect, to singalong, to holler along and to hold their arms aloft, all at once. Tickets are sure to sell fast so dont leave it too long to get yours.

Frank has partnered with Plus 1 so that £1 from every ticket goes to War Child, a charity supporting children and families affected by conflict.

Striving for a world where no childs life is torn apart by war www.warchild.org.uk