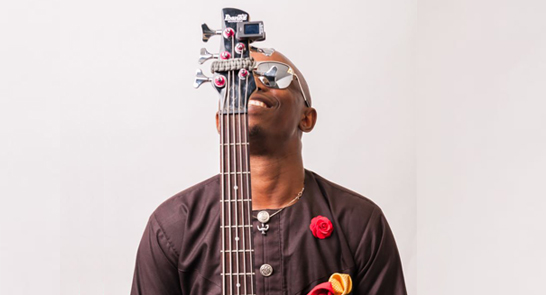 Nigerian Bassist Femi Sofela leads his 11-piece band FEMI AND THE INRHYTHMS from Lagos as they play from their new CD ’Pressure To Pleasure’.

The band mixes the cerebral musicality of afro-beat with the visceral grooves of funk underpinned with Yoruba-English vocals styles to create an eclectic futuristic world dance music making them one of the key bands from the contemporary African music scene. Femi and The InRhythms was formed by bassist Femi Sofela to put the heavy afro-beat into funk and jazz, music with which he built his reputation as a musician and producer.

Tonight, Femi and The InRhythms will play all the tracks on debut CD/LP ‘Pressure To Pleasure’ (Joyful Noise Recordings).

‘The music has catchy licks that can fill the dance floor’
KEVIN LE GENDRE, ECHOES MAGAZINE