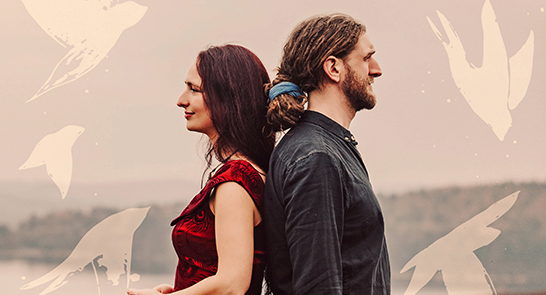 Edgelarks fly in on the tailwind of BBC award-winning duo Phillip Henry and Hannah Martin. The pair’s new project takes the roots of their previous work, from the traditional music of the British Isles to Indian classical slide guitar to the stomping roots party of Phil’s beatbox harmonica; adds a strong stem of original writing; and runs wilder with each repeat play.

From recording their first album, Singing the Bones, at home in their living room in the dead of night, they have gone on to produce three more records, each time refining the process and honing their production skills – Mynd, Live in Calstock, and Watershed (which garnered them a second nomination for Best Duo at the BBC Folk Awards in 2016).

Edgelarks, which is both their new band name and their fourth studio album, is their most innovative work to date.

Lara Conley  is a UK based Singer – Songwriter and Bodhran player. Her solo album ‘Wild Water’ was launched with a tour in Morrocco in 2017. Her songs have included charity commissions in support of gender equality and friendly beekeeping as well as being requested for celebrations and commemorations.