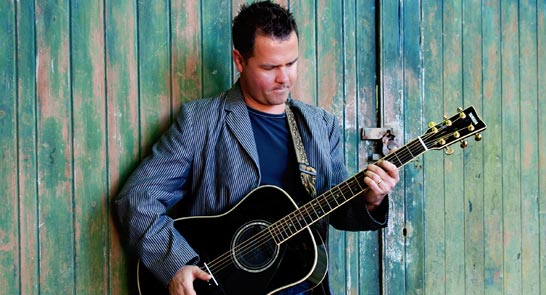 Acoustic blues and roots guitarist Derrin Nauendorf is quickly gaining a reputation as one of Australia’s most exciting new artists. An earthy soulful voice, blistering guitar skills and a bagful of inspired material makes for a truly great performance.

Over the past decade he has solidified his reputation as a singer, acoustic guitar player and songwriter of very high order. He is one of the busiest artists on the acoustic scene at the moment performing in many parts of the world.

Derrin over the years has also featured in session on the Bob Harris and Paul Jones show on BBC Radio 2, Tros Musik Cafe in Holland and Triple J Radio in Australia. He is endorsed by Yamaha guitars and in 2013 released his first studio album in four years called Distant Empires.

‘Singer- songwriter ratchets the intensity up to 11’
ACOUSTIC GUITAR MAGAZINE