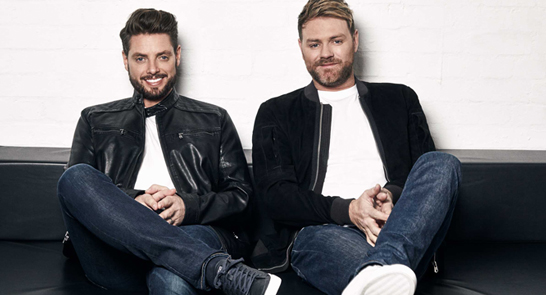 Brian McFadden and Keith Duffy, a part of the multi-platinum, record breaking bands, Westlife and Boyzone, have joined forces to create Boyzlife.

Both Keith and Brian came from Louis Walshs stable of discoveries back in the 90s and have become Irish National treasures. With International success, Boyzone topped the charts for 7 years at their peak, with Hits like When The Going Gets Tough, No Matter What, Father & Son & Words and a reunion in 2007 that sees the band still touring today. Westlife had no less than 13 number 1 singles and a further 9 top 5 singles with the hits Uptown Girl, I Have a Dream, Flying Without Wings and the massive You Raise Me Up.  Looking sleek and handsome, with their Irish wit and sparkle, fans are in for a treat of intimate gigs full of festive spirits, sing along favourites and probably a few Xmas jumpers!

Former member of the Irish boyband Westlife. Brian lived in Australia for several years where he forged a successful TV & Radio presenting career  as a judge on Australias Got Talent & Co-Host of Fox8s Football Superstar amongst others. On returing to the UK hes hosted and appeared on several TV shows, including the highly publicised ITVs Whos Doing The Dishes from 2014 to current day.