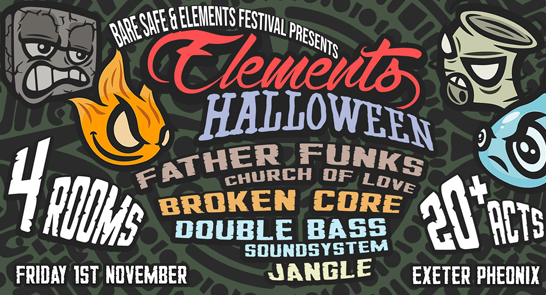 Bare Safe and Elements Festival join forces to bring you the mother of all Halloween party’s with takeovers from Father Funks Church of Love, Broken Core and Jangle. Going in hard on decor, interactive performers, projections and some serious sound systems! Big shout out to Defaced Designs for the artwork!

THE CHURCH OF LOVE IS GOING ON TOUR! Exeter are you ready for this!? After 3 years of debauchery in Bristol and in the fields of Somerset at Shindig Weekender, it’s time for us to take this show on the road! Complete with nuns, church and rotating mirror cross. London, Cardiff and Brighton smashed it already. Milford Haven and Exeter to go!!

Formed from the ashes of the Tek shop at Boomtown Fair. Broken Core was established to give a platform play filthy sounds to the masses. Our team has been affiliated with the underground scene for years now with the crew behind events such as Erisian, Lemtek, Monkey Dance, Bang Hard Tek, K.I.D soundsystem, Kinetic Audio & Ruckus Sound System, as well as a big presence on the European free party scene.

Bristol does it best! Expect a great selection of Dj’s selecting Dub, Bass Music, Jungle and hooning DnB over a one of a kind, hand crafted sound system! You ain’t seen nothing like this before!!

Bringing you out of this world bass flavas, Jangle will take you on a voyage filled with repetitive beats, womping bass and sexy vocal samples. Chunky Garage and Bassline + much more