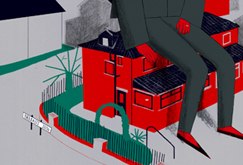 We will be joined for a Q&A in Studio 74 by Afolabi Kuti, producer of BAFTA winning Home.

Belfast, 1972. Laurence welcomes his cousin and man-on-the-run Mickey to a night of drinking, dancing and young love. But in the morning, reality catches up with them.

Two creatures fall in love, weaving a colourful world together. But when darkness threatens to consume one of them, the other must fight to stay together or risk being torn apart.

A child labourer in the burning coalfields of Jharia, India has to make a choice. Should he do what is right, or save his dying mother?

Gary and Jenny share the same cramped ‘office space’ as all beat cops: the front seat of a police car.

Some things can only be understood with maturity. New light is shed on childhood cultural misunderstandings when a Chinese mother and her British born daughter speak as adults for the first time.

A cinematic voyage through the mines, landscapes, factories and ports of Chinese production.

Alan Brown uses divine powers of recognition to foresee the fate of mankind… and breakfast. Meanwhile, Wendy has had enough of being married to ‘the next step in cognitive evolution’.

Thousands of men, women and children struggle to get into Europe as a comfortable English family sets out on what appears to be a holiday.