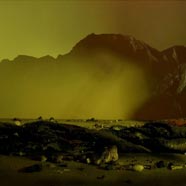 Voyager 3 celebrates humanitys exploration and fascination with the universe, and our desire for knowledge and understanding. Smiths work plays on and questions the authenticity of space photographs. They conjure up issues of whether these images from space are reliable. She has researched different moons in our solar system and interpreted her findings into images.

There are approximately 170 known moons in our solar system which we have yet to land on, photograph and explore.