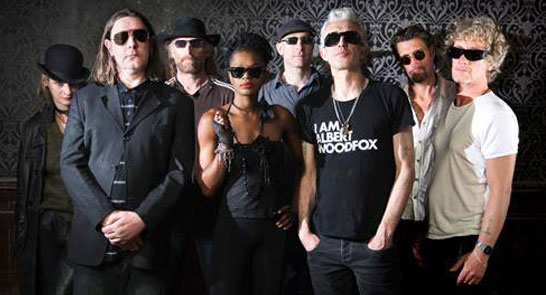 20 years and still standing, standing on the edge, on the point of no return. So where to next, when the end to everything is so inevitable? None of us are dead, which has surprised us more than it has you, especially at the end of 2016, a year that swallowed us musicians whole.

Its been 20 years since we released our first baby  Exile On Coldharbour Lane and weve just delivered our 13th album, Blues.

Its no secret that we have tempted dark fate to the point where it has lost its comedic value. We have hurt so many, and lost so much. As the cold light of day hits us in the bathroom window, the reflection is enough to make us recoil under the sheets, until we are cloaked by soft night again. Has anything been gained? Weve always had bad skin. And so we hang together by a cruel thread whose length we all miscalculated, wondering – why us? Weve chased more pipes than dreams.

It seems fitting always on an anniversary, to travel back to the beginning  the scene of the crime where one Welshman, recently excommunicated from the Mormon Church and fresh out of law school, meets a Scottish schemey poet at a squat rave in Brixton. They like pills and blues. B.B. King, Hank Williams, Bobby Rush, Rosco Gordon, Howlin Wolf, Ma Rainey and Fats Domino are all discussed with fervour. The first match is lit and Alabama 3 find roots in roots music. After courting American record deals, theme tunes to hit TV series, BAFTA awards and the departure and re-entry of more members than any band should ever carry, we find ourselves where the old Blues man told us wed be still penniless with little reason left in our charred brains.

In October 2016, we released our 13th studio album Blues on our independent label Hostage Music. Recorded with the full band in Dean Street Studios, we made a straight up RocknRoll record full of chain gang clarion calls, bittersweet dope laments, sleazy whiskey rhythms, wailing harmonicas and the obligatory Delta slide. Those seedy acid lines are all still ripping through the foundations, branding us with a hot poker. We couldnt have foreseen the amazing response to this album, with a number 1 position in the Blues iTunes charts and some incredible reviews to boot.

It was even better to finally tour the record on the road, as well as celebrating the songs that have kept us in good company for two decades. Playing packed out O2 venues, night after night, the cries for some regional shows did not fall on deaf ears. Our aim is to contaminate as many of you as possibleso let the second round begin!