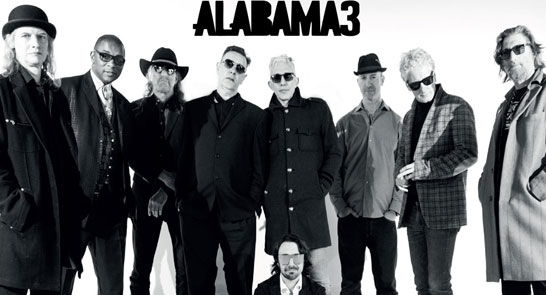 Formed in Brixton, London in the mid nineties, Alabama 3 hit the ground running with their eclectic Rock, Dance, Blues, Country, Gospel and spoken word mash-ups. Achieving international fame with Woke Up This Morning the title track for smash hit HBO TV series The Sopranos, they went on to be sampled by the likes of Nas and Jay-Z. They were furthermore deemed the best live band in the UK by The Guardian.

Their thirteenth studio album Blues released on their own Brixton based independent label Hostage Music in 2016, proved that after 21 years their fire was still burning as brightly as when they released their iconic debut album Exile On Coldharbour Lane in 1997. Maintaining their loyal following after a year of sell out shows and festivals across the country, Alabama 3 are ready to bring their holy rolling narco-evangelism to a stage near you.