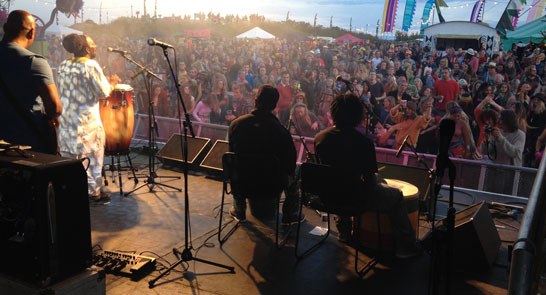 Pulsating with tribal drumbeats and chanting from the soul of Africa, African Head Charge fuse together primal rhythms with heavy psychedelic dub, roots reggae and 21st century electronica. Formed originally as a studio project in 1981, the London-based collective has gone on to achieve semi-legendary cult status, creating 13 albums and gracing stages across the world.

Their epic live show fuses together percussion, guitars, drums, keys and vocals with heavy electronic sampling. The collective use this blend of live and electronica to generate an intoxicating soundscape of reggae-inflected drumming, visceral vocals and bottomless, thrumming bass-lines that truly reach to the heart of your being.

With their back catalogue enjoying re-releases on the On-U and Warp labels, live performances feature new takes on vintage tracks alongside material from their recent album Voodoo of the Godsent compete with state-of-the art visuals  creating a deeper, darker and heavier live sound than ever before.