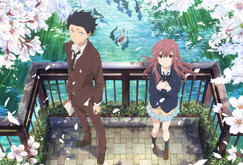 Part Of The Japan Touring Programme

Based on a popular manga comic focusing on the consequences of bullying from the perspective of both the victim and the perpetrator, this beautifully animated film is directed by one of the most sought-after anime directors in Japan, Naoko Yamada, best known for K-On, Tamako Market and Tamako Love Story.

Shoko, a young deaf student, transfers to a new school where she is bullied by Shoya for her hearing impairment. While Shoya originally leads the class in bullying Shoko, his peers soon turn on him for his lack of compassion. Six years later, the two meet again  can Shoya make up for his past mistakes, or will Shoko never forgive him?