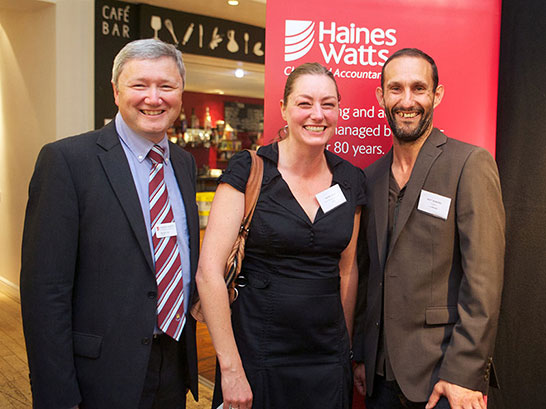 The Open’s judges – artist and curator Kevin Hunt, independent curators Day + Gluckman and Phoenix gallery curator Matt Burrows all spoke about the difficulty of this year’s decision due to the incredibly high standard of work.  Lucy Day explained, ‘One of the things about such a diverse range of practice is that it makes judging nigh on impossible.  We did some serious debate, discussion and arguing.  All positive because we simply couldn’t choose between a group of people, all of who we would have loved to give the award.’

Winning the award was an emotional moment for Busby who returned to Wales after working in London.  She said, ‘I didn’t have feedback.  I felt very isolated but it meant the work was very honest.  I didn’t know what to expect, what people would make of it.’  Her entry comprised two paintings that present interiors looking out into long dark stormy winter months.  ‘Going back to Wales I thought that a lot of my work would be landscapes but it ended up as a lot of interiors.  And I think that’s because a lot of time growing up was spent indoors.  I wanted to be honest and show that.  Not that the work was just about me, but for others who share that experience.’

This year’s Exeter Contemporary Open exhibition is open to the public from 13 September to 2 November.  It presents a range of work that, although not chosen to create a theme, seem to create unintended connections and synergies when brought together.  Phoenix Gallery curator Matt Burrows said, ‘This year’s exhibition includes strong themes around materiality, surface and functionality. Artworks merge between painting and sculpture, slide from representation into abstraction, from softness to hardness and a sense pervades the show of every day things re-examined in a new light.’

The strength of this year’s competition meant the judges were torn to such an extent that they felt compelled to split the usual Additional Award of £500 into two awards of £250.  The winners of the Additional Award were Julie Price and Oliver Tirre.  The other artists Malina Busch, Max Cahn, Anne Deeming, Hannah Mooney, Rebecca Ounstead and Charlie Godet Thomas make up an exhibition that Burrows described as, ‘ probably one of the strongest we’ve ever had.’

Now in its eighth year, the Exeter Contemporary Open has become one of the highlights of the South West’s arts calendar.  Sponsored by Haines Watts Chartered Accountants, it is providing an important national platform for contemporary visual artists. Ben de Cruz, Managing Partner of the firm said, ‘The exhibition this year is quite amazing and the overall quality of the work continues to grow. Exeter Contemporary Open has become a major art event in the area and we are delighted to continue to be involved in supporting the arts in the South West.’

A further Audience Chioice award, sponsored by Exeter Natural Health Centre and voted for by visitors to the gallery, will be announced on the 21st October.