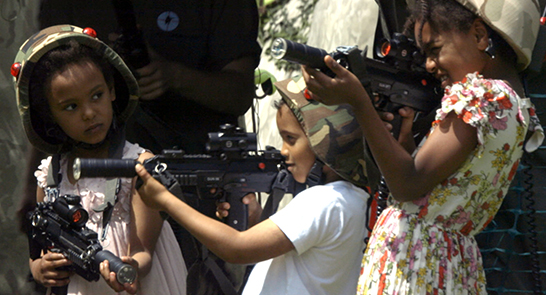 War School is a film about the battle for the hearts and minds of Britains children.

?Set against the backdrop of Remembrance the controversial and challenging documentary reveals how, faced with unprecedented opposition to its wars, the British government is using a series of new and targeted strategies to promote support for the military.

Armed Forces Day, Uniform to Work Day, Camo Day, National Heroes Day  in the streets, on television, on the web, at sports events, in schools, advertising and fashion  the military presence in civilian life is on the march. The public and ever younger children are being groomed to collude in the increasing militarisation of UK society.

?Interweaving the powerful and moving testimonies of veterans of Britains unbroken century of wars with expert commentary, archive and a redolent score, War Schools mosaic of sound and imagery evokes the story of the child soldier who becomes a peace campaigner, challenging the myth of Britain’s benign role in world affairs and asking if perpetual war is really what we want for future generations?

This special screening event will be followed by a Q&A with the films director, Mic Dixon facilitated by Ruairi Nolan.

Ruairi is the Head of Programmes for The Syria Campaign, a human rights advocacy organisation. He previously worked for the peacebuilding organisation Peace Direct for almost a decade, working on conflict resolution projects in countries including DRC, Pakistan, Sri Lanka, Central African Republic, Zimbabwe and Burundi.

Mic Dixon has worked in the UK Film and Television Industry since 1979. Credits include  The Wave that Shook the World (C4 Bafta Nominated}; Syria Undercover (PBS Frontline  Emmy Winner); Pakistan After the Floods (C4 Unreported World  One World Media Award Winner); The Other War (C4 the truth behind Operation Desert Storm  United Nations Media Peace Prize); Gandolfi  Family Business (Sheffield International Doc. Festival featured film and BFI National Selection). After a trip to the Soviet Union with a cultural delegation of independent filmmakers Mic began working with POW Productions Ltd. www.powprods.com and has focussed on films that challenge the mainstream media. He is now a fulltime filmmaker and activist.