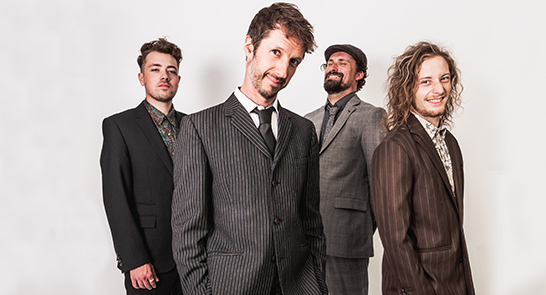 Drum and Bass MC turned singer songwriter Billy Rowan, aka The Undercover Hippy, is definitely not your average singer songwriter. His music brings together soulful vocals, infectious reggae rhythms, and the lyrical delivery of a skilled MC. Starting out as a solo act in 2007, he has since teamed up with some fantastic musicians and performs as a four piece, mixing guitars, keys, drums, bass, and backing vocals to create a high energy, interactive and highly entertaining live show.

Combining intelligent, provocative lyrics with dangerously catchy hooks and a feel good groove, this is music for the thinking man to shake his arse to. Think Natty meets Eminemon a protest marchat the Edinburgh Fringe.

Renowned for the electric atmosphere of their live shows, Billy and his band have performed at some of the UKs best festivals, including Glastonbury, Boomtown Fair, Shambala, Green Man, The Secret Garden Party, Irelands Electric Picnic, and many more.

‘Like the love-child of Steel Pulse, Kate Tempest, and The Sleaford Mods’

‘A solemn reminder that even the most powerful are fallible’

‘This is about as real as music gets!’