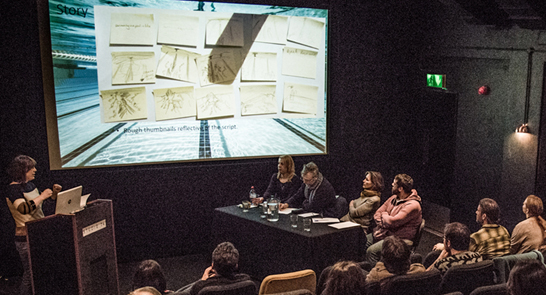 Watch filmmaking teams pitch their documentary ideas in front of a live panel to try and secure the South West Documentary Commission 2020 and get funding and support for their non-fiction short film project.

The South West Documentary Film Commission is aimed at filmmakers looking for funding to realise a non-fiction short film project exploring any subject matter, which demonstrates originality within the documentary genre. The final film is required to be 5 minutes in length and may use any form production technique for delivery, such as live action, reenactment or animation.

Jonas is the Digital & Film Manager at Exeter Phoenix. He has commissioned over 80 artists through a number of major schemes funded by Arts Council England, NESTA, Technology Strategy Board, Into Film, the BFI and the Heritage Lottery Fund.

Alice is the New Talent Executive at BFI NETWORK, having previously worked with the British Councils Film team as Film Programme Manager. During her time with British Council, Alice managed the short film and new talent support offer. Working closely with international programmers and buyers, Alice promoted UK short films across the globe and looked after Global exhibition projects including running the EU Film Festival offer internationally.  Alice joined the British Council film team after three years with Encounters Festival, based in Bristol, where she headed up communications, strategy and development for the festival, alongside running year round training and development initiatives for new and emerging filmmakers.

Luke works as Digital Programme Coordinator at Exeter Phoenix, having previously worked as freelance filmmaker and editor for ten years. His work as a filmmaker included several award winning short films, an independent feature film and a host of high profile work for major international brands.  He is the previous recipient of an Exeter Phoenix Short Film Commission, and a past winner of the Two Short Nights 48 Hour Film Competition.