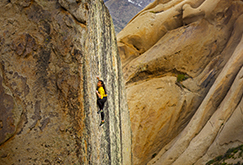 Reel Rock 14 features a brand-new collection of cutting-edge climbing films from the worlds best adventure film-makers! In a battle for El Caps coveted Nose speed record, rock legends Tommy Caldwell and Alex Honnold (star of the Oscar-winning documentary Free Solo) go head to head with Yosemite dirtbags Jim Reynolds and Brad Gobright. Join bouldering ace Nina Williams as she flexes her guns and tests her nerves well into the no-fall zone, plus more of the worlds top athletes pushing themselves to the limits in wild corners of the globe.

With nail-biting action, unique journeys and incredible cinematography, this is your chance to be part of one of climbings greatest celebrations!