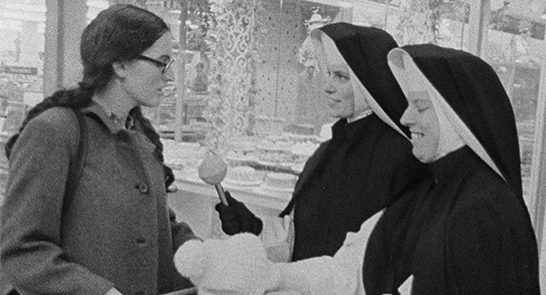 A beloved but unknown gem of pure cinéma vérité in which Sister Marie Arné and Sister Mary Campion tour Chicago during the Summer of Love, asking: Are you happy?

They meet a lonely girl, a happy mother, young lovers, hippie musicians, a sociologist, and even the actor Lincoln Perry, better known as the infamous Stepin Fetchit, now on hard times. The interviewees are sometimes taken aback, nervous, or clamouring to get into view of the camera. Each interview is a complete and thoughtful piece of the persons life, with no intercutting. The humour and sadness of these honest encounters lift the film beyond its experimental conceit into a serious and moving inquiry into contemporary society and the circumstances under which people examine their lives.

Newly restored for its 50th Anniversary this rare documentary captures the attitudes, fears, and dreams of everyday Chicagoans, giving audiences and researchers insight into the political and social climate of 1960s with music composed by Philip Glass, in his first credited film score.