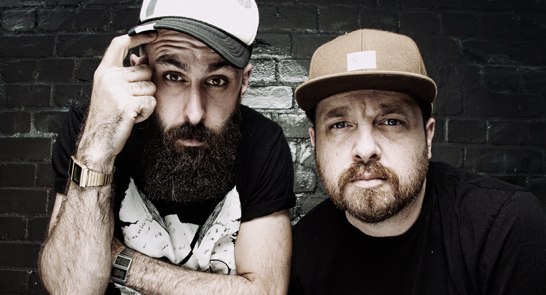 Based either side of London but originally hailing from the same small town in Essex, the duo’s immaculate conception was born in a half hour burst of creative alchemy and has since created enormous buzz, combining witty and shockingly spot-on decrees from the mind of vocalist Scroobius Pip with producer dan le sac’s mesmeric electro blessed beats.

The band gained commercial success when they released the original song “Thou Shalt Always Kill”and it was in early 2008 that they signed for Rob da Banks Sunday Best record label and released their debut album ‘Angles’, which reached #31 in the UK Charts.

They spent 2009 recording their second studio album, ‘The Logic of Chance’ which was released in March 2010, preceded by the single “Get Better”; then went their separate ways. Scroobius Pip released his second solo studio album ‘Distraction Pieces’ in 2011; whilst Le Sac released his debut solo album ‘Space Between the Words’ in 2012.

This year the duo are back with their new album ‘Repent, Replenish, Repeat’ and a string of dates around the UK.