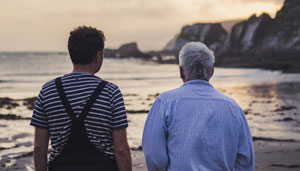 The festival finale and a chance to watch premieres of the five short films commissioned by Exeter Phoenix this year. The screening will be followed by a filmmakers discussion of the commissions process and the official opening of the 2018 Commissions.

Well be presenting awards for the festivals Best Short Film Award, Best 48 Hour Film and the Audience Choice Award. Join in the celebrations at the Two Short Nights After Party in our Café Bar with special live music guests.

When Jorge is inexplicably unable to stop playing the drums, Maria develops increasingly creative methods to care for his everyday needs whilst dealing with the complaints of their neighbours.

Before I Go focuses on the struggle of one isolated man, Michael, as he comes to terms with his diagnosis of dementia. As Michael struggles to comprehend his future, he turns to his childhood imaginary friend to confide in and to help him accept his new future.

The Hardest Fight is a look into the mind of a boxer, struggling with depression. Taking words from real interviews, the film follows the boxer as he prepares for his first fight, displaying the parallels between fighting an opponent and fighting a mental illness.

This experimental short film uses a blend of live action footage and rotoscope animation to tell the story of Heather, a young woman who finds a mysterious Totem in the forest.

The following awards will be announced during the festival:

Each winning filmmaker will receive:

Our awards are kindly sponsored by